Is there a piece of advice that you have received that has really stuck with you? If so, what was it?

Trust Azara. Azara was the magical Source that my aunt served. When I learned of the secret Aunt Juzeva carried with her when she disappeared, I was told to trust Azara. That is what keeps me going, the faith that Azara knew what she was doing when she assigned me this task. Sevry walked amidst the death and destruction, looking for the best place to make his final stand, where he could do the most damage before the Madrinans killed him. At the top of the steps leading to the front door seemed a fittingly heroic place, but it was too exposed.

An archer could cut him down before the army even entered the courtyard. Somewhere indoors would be better. In the main hall, the lower half of the great staircase had collapsed; perhaps if he climbed onto the upper, intact, part, and fought from there—. He stopped at the sound of a faint moan from behind a pile of rubble near the staircase. Sword in hand, he moved silently towards the place the sound had come from. He heard it again, a low, animal sound, not a call for help but an involuntary groan of pain. Keeping low, alert for signs of a trap, he stepped closer, and saw the crumpled body of a woman wearing the white robe of Azara. 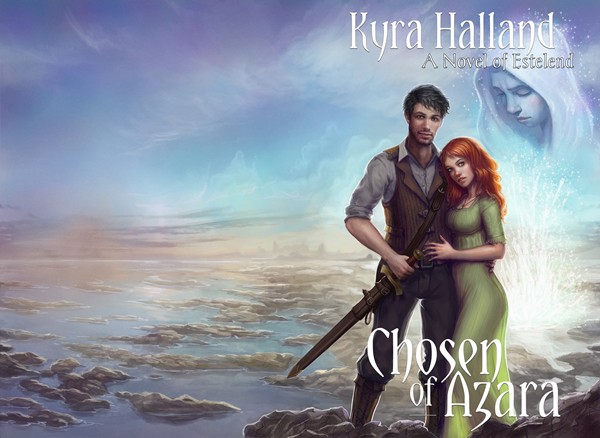 The back of the robe was saturated with blood both dried and fresh. Sevry knelt next to the woman and laid her head on his lap.

Between her wounds and his lack of resources, there was nothing he could do for her but try to comfort her for a moment. She was large for a Savarunan woman, and something about her size teased at his memory. She opened her eyes, studied him briefly, then smiled. I served your Aunt Juzeva.


Then he took up the soothing touch again. You must not die. Sevry raised her head and put his waterskin to her lips. A Source-token, a small crystal vial on a silver chain. Into it, Azara put the power to restore all the Sources of Savaru if they were ever destroyed. Azara would have told me if she had died. Find her, and bring her back, so Savaru can live again! The last word ended in another rattling cough. Sevry gave Ysa the last few drops from his waterskin.

Once again her voice trailed off into a harsh fit of coughing, which was quickly drowned out by the sound of dozens of mounted soldiers riding into the courtyard. Sevry started to gather Ysa into his arms, to take her with him, but she pushed him away. Save yourself. Let Savaru live again. The first soldiers entered the great hall. Sevry scrambled up onto the pile of rubble that was the lower part of the staircase.

More of our animals

He grabbed the broken edge of the upper part and dragged himself up, determined now not to let the soldiers corner him. Sword in hand, he ran upstairs, meaning to find a place to hide, but they came too quickly, clambering up onto the broken staircase after him.

He ran through the hallways and up more stairs, trying to lose the Madrinans. It galled him to be running instead of fighting, but now he had a reason to live. He believed Ysa; no one could make up a lie like that so close to death. It almost seemed as if she had deliberately pushed away death so that she could tell her secret to someone who could make use of the knowledge.

The Madrinans drove him upwards through the convent until, on the top floor, he came to a ladder that led through a trapdoor in the ceiling. He climbed the ladder and came out onto the roof, which was bordered by a low stone parapet.

The wave-wracked, rocky cove of Azara lay far below. Sevry stood on the roof, trying to catch his breath and gather his courage for what was to come. Trust Azara, Ysa had told him. It was all he could do now. The first few Madrinan soldiers climbed up through the opening in the roof, grinning and boasting in anticipation of the honors that would come to the man who killed the last Savarunan king. Kyra Halland.


Email Signup. Juzeva, a princess of Savaru, sworn to the service of the magical Source Azara, sacrifices everything to stop a war, only to find herself caught in a web of evil and deceit woven by the corrupt sorcerer who wants to claim Azara's power for his own.